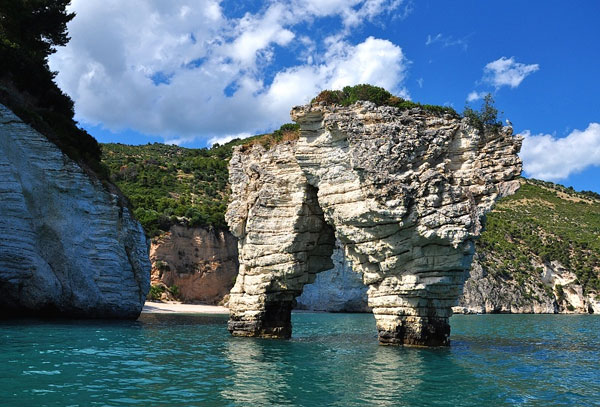 Puglia is Italy’s ascendant region, a place where savvy travelers bored or worn down by the crowds of Campania and Tuscany escape for something a bit less frenetic and manicured. Top of the list for prospective newcomers is the food. Puglia’s cucina povera is about as earthy as Italian cuisine gets without eating it straight out of the soil. Then there’s the exuberant architecture, best summarized by the word ‘baroque’ and exhibited in all its finery in the glittering ‘Florence of the South’, Lecce, and its smaller sibling, Gallipoli.

With the longest coastline of any region in mainland Italy, Puglia is larger than many people realize. In the north, the spur of land sticking out into the Adriatic is occupied by the balmy microclimates of the Gargano peninsula, a kind of miniature Amalfi with fewer poseurs. The Italian’s boot’s ‘stiletto’ hosts the land of Salento, a dry scrubby region famous for its wines, and bloodthirsty Greek and Turkish history. In between lies the Valle d’Itria, a karstic depression populated by vastly contrasting medieval towns that have little in common apart from their haunting beauty.

Of the larger cities, Brindisi, an erstwhile Roman settlement, is one of the major departure points for Greece (by ferry), while Puglia’s largest metropolis, Bari has a university and trendier inclinations.