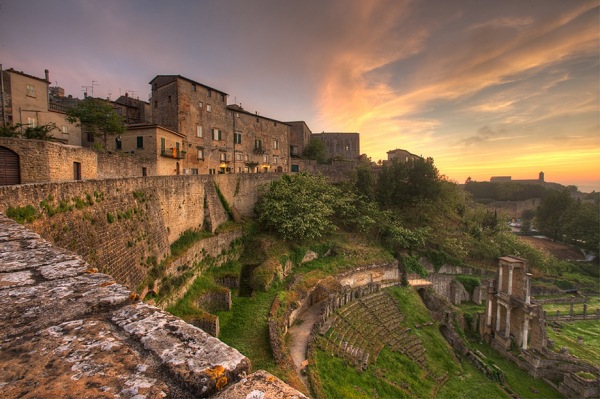 Volterra’s well-preserved medieval ramparts give the windswept town a proud, forbidding air that author Stephanie Meyer deemed ideal for the discriminating tastes of the planet’s principal vampire coven in her wildly popular Twilight book series. Fortunately, the reality is considerably more welcoming, as a wander through the winding cobbled streets attests.
The Etruscan settlement of Velathri was an important trading centre and senior partner of the Dodecapolis. It’s believed that as many as 25,000 people lived here in its Etruscan heyday. Partly because of the surrounding inhospitable terrain, the city was among the last to succumb to Rome – it was absorbed into the Roman confederation around 260 BC and renamed Volaterrae. The bulk of the old city was raised in the 12th and 13th centuries under a fiercely independent free comune. The city first entered Florence’s orbit in 1361, but the people of Volterra fought hard against Medici rule – their rebellion was brought to a brutal end when Lorenzo Il Magnifico’s soldiers sacked the city in 1472. There was another rebellion in 1530 – again brutally crushed by the Florentines – but Volterra would never again achieve self-government, moving from Florentine rule to that of the Grand Duchy of Tuscany before unification in 1860. Since Etruscan times the people of Volterra have been famous for carving alabaster mined from nearby quarries; artistry still in evidence locally today.