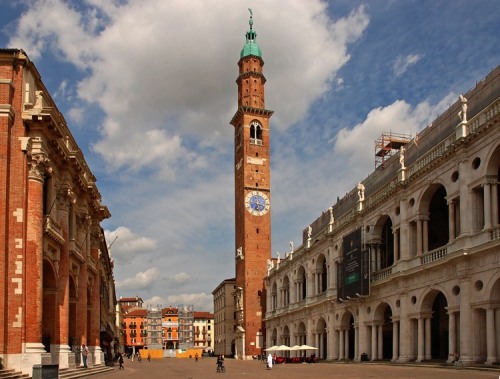 Vicenza is located in the Veneto region of Italy, in its own province (the Provincia di Vicenza). It’s a medium-sized town, with a population of 110,000. There has been a settlement here right back into the depths of history; remains of the Roman town can still be seen. Later, after the barbarian invasions which repeatedly devastated this part of Italy, it became a significant town, ruled at different times by various greater powers. For several centuries it was governed by Venice; then Napoleon, then the Austrians. In 1866 it became part of the new Kingdom of Italy.

Vicenza was a prosperous town under Venetian rule, and its pride was demonstrated in fine architecture, much of which still survives. Its ‘unique appearance,’ largely owing to the work of influential sixteenth-century architect Andrea Palladio, has led to the town’s designation as a UNESCO World Heritage Site: City of Vicenza and the Palladian Villas of the Veneto. After Palladio, Vicenza is most famous for its trade in precious metals, it’s also known as the ‘City of gold’.

It’s a lovely town to visit; with a beautiful, compact town centre and attractive villas and viewpoints in the hills a short walk away.