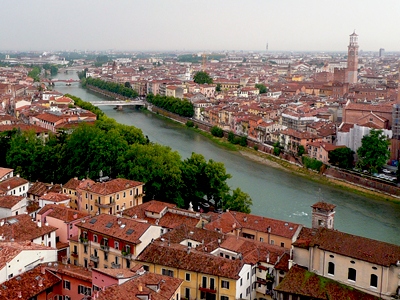 Shakespeare placed star-crossed lovers Romeo Montague and Juliet Capulet in Verona for good reason: romance, drama and fatal family feuding have been the city’s hallmark for centuries. From the 3rd century BC Verona was a Roman trade centre with ancient gates, a forum (now Piazza delle Erbe) and a grand Roman arena, which still serves as one of the world’s great opera venues. In the Middle Ages the city flourished under the wrathful della Scala clan, who were as much energetic patrons of the arts as they were murderous tyrants. Their elaborate Gothic tombs, the Arche Scaligere, are just off Piazza dei Signori.

Under Cangrande I (1308–28) Verona conquered Padua and Vicenza, with Dante, Petrarch and Giotto benefitting from the city’s patronage. But the fratricidal rage of Cangrande II (1351–59) complicated matters, and the della Scala family were run out of town in 1387. Venice took definitive control in 1404, ruling until Napoleon’s arrival in 1797.

The city became a Fascist control centre from 1938 to 1945, a key location for Resistance interrogation and transit point for Italian Jews sent to Nazi concentration camps. Today, the city is a Unesco World Heritage Site and a cosmopolitan crossroads, especially in summer when the 2000-year-old arena hosts opera’s biggest names.