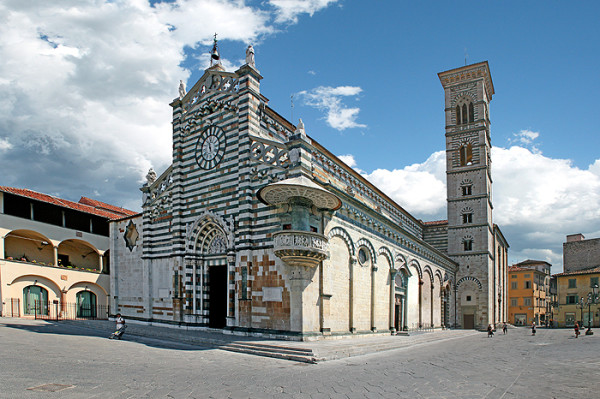 About 24 kilometers from the center of Florence—a 20-minute train trip—is Tuscany’s second largest city, Prato, home to some 190,000 people, including Italy’s second-largest Chinese community. A day in Prato reveals the many ways the city’s important historic and cultural past intersects with its industrial present. If we had to give you just one reason to visit Prato, it might be for what most Americans call biscotti. The twice-baked cookie that is great dipped in sweet wine or coffee is called ‘the’ Biscotto di Prato. You can only get the real thing here. Prato’s other ‘must-sees’ and ‘must-dos’ are less portable yet equally rooted in history. Interest piqued? On these pages, you’ll find TF’s top 10 list of things to do in Prato, Florence’s often-overlooked neighbour.

Like Florence, Prato got rich during the early Renaissance on banking and trading. What were they trading? Textiles brought the world’s riches there. In the Renaissance, wool and silk from Prato was known around Europe as the best one could buy. Textiles are still a major part of Prato’s economy. An excellent high school, Istituto Buzzi, turns out graduates who, at age 18, have already specialized in various aspects of textile production and trade. And it should come as no surprise that the city has one of the few dedicated textile museums in Italy, the Museo del Tessuto.

In the fourteenth century, Francesco Datini (1335–1410) was the wealthiest man in town, having built a trading empire with agents in most of Europe’s major cities. Have you changed money at a currency exchange and realized that money is made in the way the exchange rate is set, even if there is ostensibly no commission? You can blame (or thank) Datini. He is credited with inventing the bill of exchange, both for the purposes of lending money and for the transfer of funds in different currencies. His palazzo in the center of Prato is now home to an impressive archive and international center for the study of historical economics (for details, see www.museocasadatini.it).

The Duomo of Prato is, as in most Italian cities, worth a stop on any tourist itinerary. Due to Prato’s vast wealth in the early modern period and to the proximity to Florence, Prato’s Duomo boasts some important works of art. The Romanesque style church has a straiated marble exterior that shows evidence of the various phases of its construction. An unusual feature is the circular pulpit on an external corner: this is the place from where the city’s most important relic, the Sacra Cintola (sacred belt) of the Virgin Mary is displayed to the public on five feast days per year (see TF 154). The reliefs on the outside of the pulpit were designed by Donatello and the originals are conserved in the adjacent museum; they are considered a precursor to the Cantoria by Donatello (now in Florence’s Opera del Duomo museum). Inside the church, to the left of the entrance against the counterfaçade is another unusual feature: the most important chapel is located here rather than in the apse, and is dedicated to the Virgin Mary and her relic. It is decorated with fourteenth-century frescoes by Agnolo Gaddi. The frescoes in the high chapel, however, are the recently restored cycle by Filippo Lippi (1465), which tells the stories of St. Stephen and St. John the Baptist with masterful use of figures and color (see TF 75).