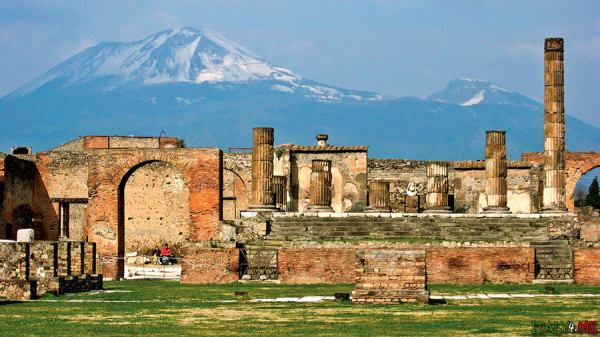 Pompeii is in Campania, Italy, not far from Naples. Its major attraction is the ruined ancient Roman city of the same name, which was engulfed by Mt. Vesuvius in AD 79. This is a UNESCO World Heritage Site.

Romans took control of Pompeii around 200 BC. On August 24, 79 AD, Vesuvius erupted, burying the nearby town of Pompeii in ash and pumice, killing around 3,000 people, the rest of the population of 20,000 people having already fled, and preserving the city in its state from that fateful day. Pompeii is an excavation (It: scavi) site and outdoor museum of the ancient Roman settlement. This site is considered to be one of the few sites where an ancient city has been preserved in detail – everything from jars and tables, to paintings and people were frozen in time, yielding, together with neighbouring Herculaneum which suffered the same fate, an unprecedented opportunity to see how the people lived two thousand years ago.