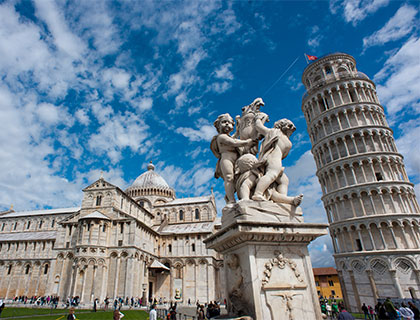 Pisa is worldly famous for its Leaning Tower, but if you decide to discover more of the city, you will be astonished by its artistic treasures. Piazza dei Miracoli is a real jewel of Romanesque architecture: the magnificence of the square will overwhelm you as you pass through Porta Nuova, one of the ancient gates of the Medieval city walls. The Duomo (1064), known in the past as the “snow-white marble temple”, is not only an architectural masterpiece, it is also evidence of the religious devotion of the people of Pisa, as well as a symbol of its wealth and power in the Middle Ages. Inscriptions are still visible on the outside celebrating naval victories.

The interior features a magnificent gilded wooden ceiling, a long women’s gallery, a huge glittering mosaic over the main altar, a pulpit by Giovanni Pisano and the so-called Galileo lamp. The grave of the Emperor Henry VII lies close to that of the town’s patron saint. The Monumental graveyard is also a “must-see” place, featuring many Roman graves, frescoes by the Medieval painter Buffalmacco, as well as those by the renowned Renaissance artist Benozzo Gozzoli.

The Baptistry, erected in the 12th century, a few years before the Bell Tower, boasts amazing columns with floral decoration, portraits of the Virgin Mary and the Apostles, as well as stories from the life of St. John the Baptist. We suggest a visit inside both of the Cathedral and the Graveyard.

About 15 minutes away from the Cathedral is Piazza dei Cavalieri, acknowledged as one of the most important examples of late Renaissance city planning and architecture. From there, a short walk will lead us into the University district.

If you’re coming by car we suggest meeting in front of the cafè at the Pietrasantina car park (free of charge!). This car park is located just 15 minutes away from Piazza dei Miracoli.