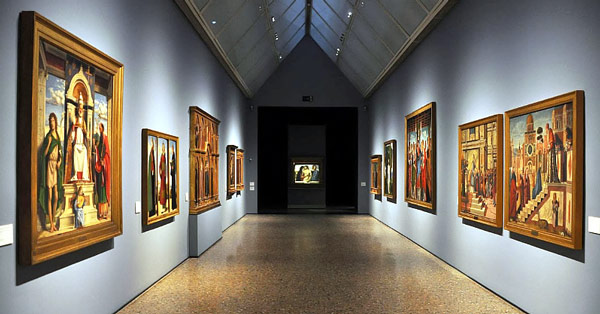 While many people use Milan as a gateway to Italy, most don’t spend much time in the city. That’s a shame, because although Milan doesn’t look as quaint or charming as those hilltop villages in Tuscany you’ve been dreaming of, this center of banking and fashion has plenty to offer the visitor – especially if you love art.

Milan was ruled for many years by families such as the Visconti and the Sforza, both of which did what ruling families often did – they patronized fashionable artists of their eras. This meant Milan became a major Italian center for art starting in the 14th century. Leonardo da Vinci (who is usually more closely associated with his native Tuscany) lived and worked in Milan for nearly 20 years – during which time he painted one of the most famous frescoes in all of Italy.

Today, there are several art museums and attractions in Milan worth checking out, spanning several centuries and styles. Here are a few of the art highlights of a visit to Milan.

The Last Supper – Leonardo’s masterpiece is a must-see in Milan, there’s no question about it. The trouble is that last-minute planning means you’ll probably miss out. Tickets are sold out months in advance sometimes, and a visit lasts only a very strictly timed 15 minutes – so you need to plan ahead or book a guided tour of Milan that includes a visit to The Last Supper. The latter is an especially good idea if you’ve got limited time in the city.

Duomo – Milan’s many-spired cathedral is fairly sparse-looking inside, but the architecture is a fine example of the Gothic period. A visit inside the cathedral is free (viewing the city from its rooftop is not free, but totally worth it on a clear day).

Pinacoteca di Brera – If you’ve only got time for one art museum in Milan, make it the Pinacoteca di Brera. It’s home to one of the best collections of Italian painting you’ll find anywhere, including work by Caravaggio, Raphael, Titian, Veronese, Tintoretto, Bramante, Bellini, and Piero della Francesca. Other (non-Italian) highlights include work by Rembrandt, Rubens, Picasso, Hayez, and Mantegna.

Triennale Design Museum – Fans of design will definitely want to stop into the Triennale in the Parco Sempione. The museum chronicles the history of contemporary Italian design, and although many of the items on display are household goods or other things meant to be used, there’s no getting around the fact that it’s art.

Museum of the 20th Century – As the name suggests, this museum (Museo del Novecento in Italian) is all about the 20th century, and features both Italian and non-Italian art. You’ll find work by Picasso, Matisse, Mondrian, Modigliani, and Kandinskij, among others.

Galleria d’Arte Moderna – The eras depicted at Milan’s “Modern Art Gallery” are historic now. This is where you’ll see paintings from the 18th-20th centuries, featuring artists such as Manet, van Gogh, and Gauguin.

Milan has a tendency to seem less picturesque to visitors than some other Italian cities, but it doesn’t have to be that way. Let a guide show you around Milan and you’ll not only get to see some of the masterpieces in the city’s museums, you’ll also learn to appreciate other artistic aspects of the city – such as the world-famous La Scala opera house (even if you don’t see a show), the mini-museums inside the historic Castello Sforzesco, and Leonardo da Vinci’s enormous horse statue near the San Siro soccer stadium.