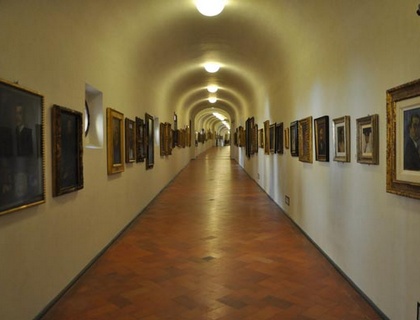 The Vasari Corridor visit is an exclusive experience that is certainly worth, once you are in Florence. This tour is designed for travelers who already know the city, but who want to explore something off-the-beaten track.

The Corridor is a covered walk nearly one kilometer in length. Built in only 5 months by order of Cosimo I de’ Medici, it was constructed in 1564 according to the design of Giorgio Vasari.
The construction was motivated by Cosimo’s desire to move freely between his residence and the government palace. He felt unsafe in public, and the Corridor also functioned to prevent an attempt on his life.

You will enjoy the unique privilege of walking above the Old Bridge, on top of all the goldsmith’s shops while admiring the largest collection of self- portraits in Western Art.

This extraordinary collection, unique in its genre, was created by the Lords of Florence beginning in the late XVII century. The collection boasts self-portraits by the greatest Masters of Western Art, like Giorgio Vasari (of the Corridor fame), Andrea del Sarto, Bernini, Annibale Carracci, Guido Reni, Salvator Rosa, Rubens, Canova, Corot, Ingres, David, Delacroix, Ensor, Chagall and many others.

Cardinal Leopoldo de’ Medici, the younger brother of the Grand-duke Ferdinando II, began the collection of self-portraits in 1675. It was then expanded by the Hapsburg-Lorraine and Savoy families, after the Medici family died out.

In the first section of the Corridor, in addition to the self-portrait collection, we can also find a large selection of works from the greatest Italian and European painters of the XVII and XVIII centuries. Some of these masterpieces include works by Caravaggesque artists from the beginning of the 1600s.

The first section provides an exciting overview of the most representative local painting Schools in Italy during the Baroque time. Ranging from the religious paintings of the Lombard school to Naples, with its popular and narrative vein, to the famous Bolognese and Genoese schools. Genoese painting in particular was strongly influenced by Flemish art, whose greatest representatives, Rubens and Van Dyke, both resided in Genoa.

The Corridor is not only a display space, it’ is a connection between Palazzo della Signoria, the Uffizi, Pitti Palace and its Gardens. It has become one immense, continuous museum thanks to these connections.