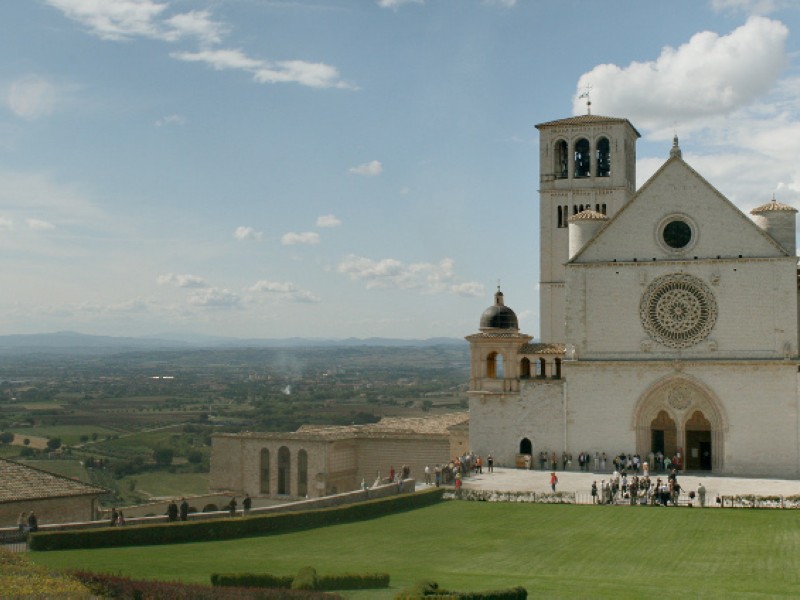 Assisi is a small Umbrian town in central Italy, located 12 miles (19 km) east of Perugia at an elevation of 1,300 feet (400 meters). Assisi is best known as the birthplace of St. Francis of Assisi — patron saint of Italy, founder of the Franciscan order, and one of the most popular Catholic saints in history. Assisi’s main attraction is the 13th-century Basilica di San Francesco, which contains the sacred relics of Francis and beautiful frescoes of his life. And there are at least seven other churches well worth visiting for their history, beauty, and connection with Francis or his friend Clare. The town of Assisi, with its Roman ruins, winding medieval streets and sacred shrines, has been a major Catholic pilgrimage destination for centuries and is today one of the most popular tourist destinations in Italy. Although Assisi has only about 3,000 inhabitants (26,000 in the larger comune of Assisi), 4 to 5 million visitors throng the small town each year. As would be expected, the city has become a bit “touristy” in the process – but its many great sites make it very much worth seeing nevertheless. And several sites outside of the city walls remain quiet and frequented mainly by pilgrims. The Sacred Destinations team spent five happy days in Assisi in April 2008 and have many photos to share! Follow a link below to begin exploring Assisi.