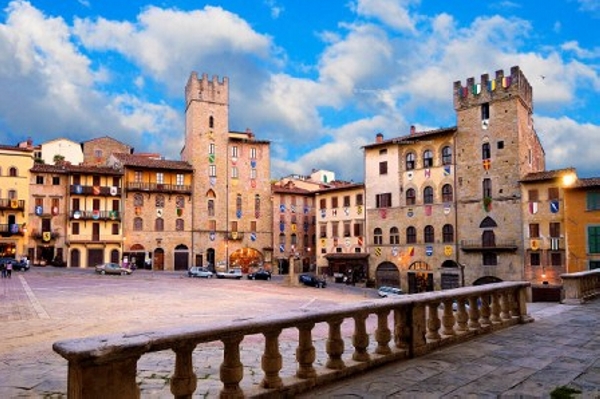 Arezzo is one of the wealthiest cities in Tuscany, due to its tradition in gold-smithery. Located in southeastern Tuscany, it sits atop a hill (where else?) at the crossroads of four valleys: the Val Tiberina, Casentino, Valdarno and Valdichiana.
Its ancient origins are verified by the stone tools and the so-called Man of the Elm discovered here and found to date back to the Paleolithic era. The Etruscan Aritim was founded around the 9th century B.C., and quickly became one of the most important cities in Tuscany, playing an important role over the centuries due to its strategic position along the Roman Via Cassia.

Even though the Medieval center was destroyed during World War II, Arezzo still has plenty of monuments, churches and museums remaining that offer visitors a chance to step back into history. The Church of San Francesco is probably the most famous in Arezzo, with the incredible Early Renaissance fresco cycle by Piero della Francesca depicting the Legend of the True Cross. You then head uphill to Piazza Grande, then on to the Medicean Fortress, visit the Cathedral dedicated to San Donato, then back down to the Roman Amphitheater and the Church of San Domenico with the wooden Crucifix by Cimabue. Take a look at our suggested itinerary for a day in Arezzo from top to bottom.

Arezzo has much to offer although it generally is not included in the main itineraries of Tuscany. If you’re visiting Tuscany for the first time, then there are certainly other places in Tuscany more famous that should be included during your short vacation. But if you’re returning to Tuscany or have a week in Tuscany, make your way to Arezzo and to the surrounding countryside for a day. You’ll find less visitors and many more locals, as well as the many treasures in the towns and castles that played an important role in the history of Tuscany. Visit Cortona, Anghiari, Monterchi and Sansepolcro (if you love Piero della Francesca) and the beautiful castle of Poppi – these are just some of the most beautiful towns in the province of Arezzo that wait to be discovered on your Tuscan trip.